The history of saffron 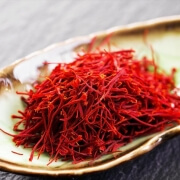 The history of saffron and its uses span 4000 years. It has been used in different cultures and civilizations. Saffron is also botanically known as Crocus sativus, an autumn-flowering perennial plant, from which the saffron spice is extracted. Throughout the centuries it has become one of the most expensive spices in the world. With its bitter taste and light metallic notes, saffron was used as a spice, fragrance, dye and medicine. The name saffron originates from the persian word “Zar-paran”.

Zar-paran is the oldest known name for the spice. The first syllable ‘Zar’ is the Persian translation for gold. ‘Par’ means flower blossom and can be traced back to the saffron origin, which consists of blossom of purple crocuses.This is how the ancient Persian name Zarparan, “flowers as valuable as gold”, also known as “the red gold of Persia” developed. Also, according to an oldPersiansaying, Persia’s king Darius, ca. 500 BC. providedhimself and his fellowship with saffron from Qāen (now South Khorasan province in Iran). It was used, in addition to cuisine and medicine, for dyeing fabrics, shoes and magnificent robes. At that time people were already aware of the amazing characteristics and uses of saffron, so the Persianrulers planted saffron flowers in the fields of Kashmir after their conquest. Thus, it is believed that saffron cultivation and its use spread from Kashmir to the Indian subcontinent.

With the reign of Alexander the Great, the saffron blossom found its way to the Greeks. Greek mythology tells the story of Zeus sleeping on a bed of saffron. “The spice of the gods and kings” was the name the Greeks gave the saffron blossom; later the Romans also appreciate saffron.In the 9th Century with conquest of the Mediterranean and Spain by the Arabs, it is believed that the saffron was brought to Spain by the Arabs and from there the spice had its spread in Europe.

Today Iran is the main supplier of saffron worldwide with 90-95% of saffron world production. The Iranian saffron is also known with its best and highest quality. The hinterland of Birjand, Ghaen (Ghayen), Ferdows in the province of South Khorasan, together with the growing areas of Gonabad and Torbat-e Heydarieh, in the province of Razavi Khorasan, are the main producing regions.Afghanistan has also started to cultivate saffron again in the recent years.

Despite numerous efforts in countries such as Austria, England, Germany and Switzerland to cultivate saffron, only few locations continue to harvest in Northern and Central Europe. These include the small Swiss village of Mund in the Valais, whose saffron production amounts to several kilograms per year.